We’re honored our reputation for providing beautiful facilities that reflect the unique culture of many of Oklahoma’s Native American tribes led the Shawnee Tribe to select us to help create their dream ─ a new tribal heritage center to become “a place that provides an opportunity for the Shawnee People to tell our story, in our own words, to tribal members, the local community and visitors.”

The Heritage Center is doubly special to the Shawnees, as it’s the culmination of a long and winding history which saw the tribe relocated from its ancestral home in the Ohio Valley to the state of Kansas, and later to Oklahoma, where they were officially incorporated as part of the Cherokee Indian Nation. It wasn’t until 2000 that the United States Congress officially restored the Shawnee Tribe to its original status as a separate and sovereign Indian nation. This new facility is a major milestone for the tribe in the restoration and promotion of their unique culture to tribal members and the broader community, as well as providing an archive to store and preserve historical documents and artifacts.

To kick-start the project, FSB conducted an interactive workshop with key members of the tribe in order to obtain a broad outline and vision, encompassing the desired elements of the center and the important symbolism to include within its walls. Additional workshops and conversations with Shawnee leaders further coalesced their wishes for the new facility.

The new Heritage Center features a gallery/exhibit area, large and small viewing rooms, a catering kitchen, gift shop, classrooms and administrative space, along with areas for storing and preserving artifacts. Visitor traffic flow through the center is counter-clockwise, in keeping with Shawnee tradition. With a convenient and high-visibility site location just south of the Missouri/Kansas border, adjacent to a State of Oklahoma Welcome Center, visitors are also able to park and easily visit the Heritage Center without paying to exit the turnpike.

(*project completed by Jason Holuby as a part of FSB) 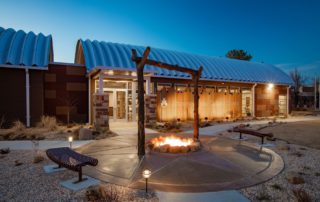 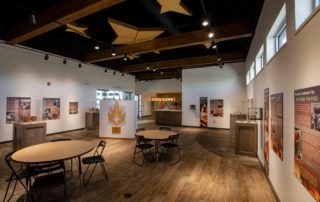 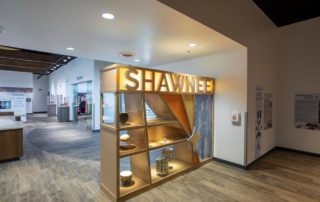